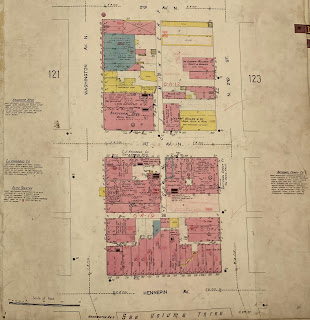 Caption: Sanborn maps "show the size, shape, and construction of dwellings, commercial buildings, and factories as well as fire walls, locations of windows and doors, sprinkler systems, and types of roofs. The maps also indicate widths and names of streets, property boundaries, building use, and house and block numbers". -- Introduction to the Sanborn Map Collection, Library of Congress

Previously owned by the City of Minneapolis, these Sanborn Atlases were among a collection of Twin Cities-area maps and atlases stored in the clock tower of the Municipal Building -- a very non-climate-controlled environment! When the City cleared out that room, the cache of maps and atlases could have been lost; but the University of Minnesota Libraries entered an agreement with the City of Minneapolis and the Minnesota Historical Society to add the materials to the Borchert Map Library collection.

The atlases have been cataloged at the Map Library and have now made their way to the Digitization unit for scanning. When they are done, digital images of the atlases will be published in UMedia at the University of Minnesota and then added to the Geoportal. Currently, the Geoportal only has Minneapolis fire insurance maps available via subscription, so these freely-available scans will be a welcome addition.

Caption: The Volume Boundary Map indexes the area of coverage for each atlas volume.

Caption: This "Key Map" includes the legend and index map for Volume 2.

Caption: Detail from Page 122 shows the fire station at the corner of 3rd Avenue N. and N. 2nd Street.

Caption: These volumes from the 1912 set await scanning inside the University of Minnesota's Andersen Library.

Caption: Volume 2 sits under the bright lights on the platform where it will be photographed.

Laura Kane McElfresh is the Cartographic Metadata Librarian at the University of Minnesota Libraries.