January 06, 2022
By Kathleen Weessies
The Hixson Plat Map Atlases of Michigan digital collection contains Hixson plat books for 36 of Michigan’s 83 counties. The W. W. Hixson & Co. published land atlases for numerous midwest states between 1920 and 1955. Plat books are atlases showing larger parcel boundaries and the owner’s name. A plat atlas generally has one township per page (36 square miles), identifying who owns individual parcels of land and the number of acres in each parcel. The plat shows township sections, roads, railroads, boundaries of towns and urban areas, and bodies of water. Local schools, churches and cemeteries are also noted on each map.

Since plat maps can be used to trace property ownership over time, they are often sought out by genealogists or people interested in family histories, as well as by historians. No Hixson plat books have dates on them. We know the years the company was in business and we can estimate dates based on the naming on highways. 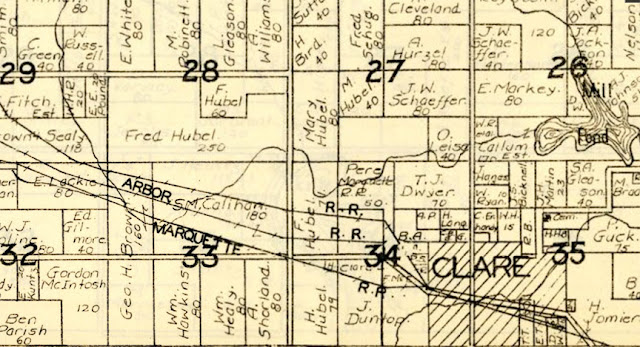 Caption: Before the formation of state and federal highways, people journeyed through Michigan mainly on locally made roads. This map shows the streets around Clare, Michigan. Prior to the 1920s though 3 railroads were passing through Clare, Michigan, we had yet to see Highway M-10, M-115, or US 127. 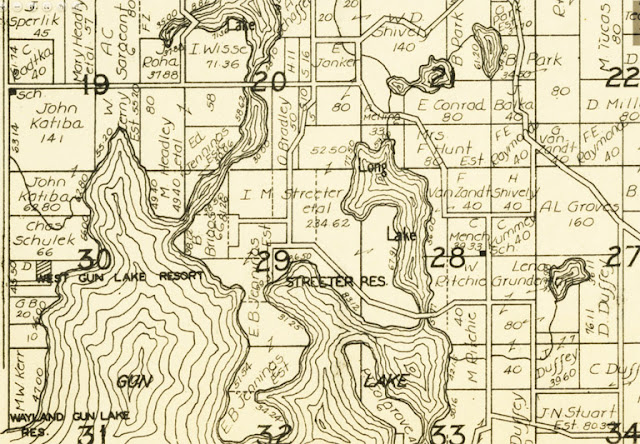 Caption: Before the Yankee Springs Recreation Area, the land around Gun Lake was privately owned. This map shows the landowners and their acreage, it was made between 1920-1939.